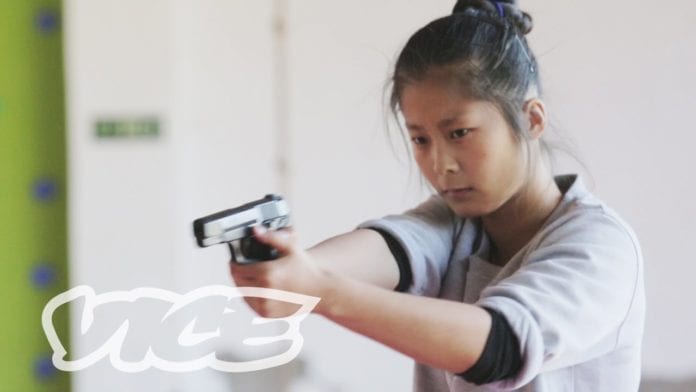 China‘s booming billionaire population has developed a penchant for China’s elite female bodyguards, who often serve as status symbols as well as muscle. Female guards, valued for their covert presence, precision, and elegance, are in particularly high demand at the moment.

Portrait of a 1760 Imperial Bodyguard Zhanyinbao

This portrait shows an imperial bodyguard during the Qing dynasty. This and portraits like this hung in the Hall of Imperial Brilliance (Ziguang Ge), in the Forbidden City. There is also a poem inscribed in both Chinese and Manchu above the portrait that reads

Barehanded he rode the giant whale,
Capturing Weinuo in battle.
The bandits’ heads were strung together
The length of his long lance.
With both hands he held open the declaration of war
All the way to Balikun [in Sinjiang Province].
Without [even pausing] to comb his horse’s mane,
He returned and reported to his commander.

How many female bodyguards work in China?

The China Daily newspaper stated that in Guangzhou alone, the private security industry employed no fewer than 5000 personal bodyguards..

So you can see the bodyguard industry employ thousands across China but at this stage the female numbers a fairly low but more and more woman are signing up for training.

How much does a bodyguard cost?

The American national average for a bodyguard is $25 per hour but this can quickly increase to $150 for professional executive services.

How much does a bodyguard make?

The average bodyguard makes approx. $55,000 per year but some earn up to $180,000 per year. Obviously the pay reflects the danger, location, experience, training and job requirements.

My Story of Secondary Infertility